My brief meeting with this incredible woman who changed my life... in such a brief moment in time... I am not surprised she lived to be 100, she seemed to be so full of life and had such a passion for the visual world!  We also had a few things in common, I love the Gaspe, I was born there and raised there, ... This was also a place that was close to Doris McCarthy's heart, she painted there for many years and captured it's magic and beauty with such grace, in her paintings.
A few years ago...ok quite a few years ago now, ...after completing a course at The Haliburton School of the Arts, the group I was with  decided to have a group Art show. One of the instructors  invited Mrs. McCarthy, who happened to be in Haliburton at the time. She arrived and proceeded to blend in with the crowd, it didn't work... she was instantly a celebrity! We were all listening intensely, I finally had a moment to say hi and to shake her hand, she said hello and then in a very direct manor looked at my son who was probably 7 at he time, and said " look at me in the eye young man when someone is talking to you!... and so he did and so did we all after that! That's just the kind of person she was, I think when she spoke everyone listened! Then she looked at me and said "who did this one?"strangely enough, she pointed to my blue nude... I said it was mine, and she looked at me again and with a very serious and confident smile she replied," it is my favorite of the show!" I was a little stunned considering she was one of the greatest Canadian women artists of her time, a legacy to me  ... I felt instantly honored and humbled both at the same time. Then she proceeded without missing a beat, " and who's is this?" She again pointed to a piece at the other end of the room, ... it was my  drawing of a lighthouse on a cliff...I looked at her and said it was mine also. She did a moment of reflection looked at me right in the eyes and said, "well this is my second favorite..."
That was a very special moment in my life, one I had recently sort of forgotten about, I felt so much appreciation for being able to paint my colors and to draw my lines with the freedom that I could, because it was mine.  I was shown how GREAT teaching from a GREAT ONE can stay with you for a lifetime, even if it is only a single vote of confidence for a brief moment in time...  I am thankful that today I can still feel that moment.

Look at the Art Blog

Check out the Photo Blog 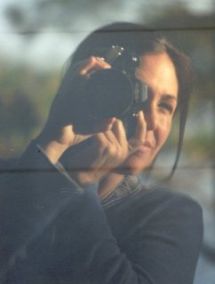 The original of this work was done in acrylic on canvas, from my memories of hiking with friends in the White Mountains of New Hampshire. It is owned by another hiker, who shared the experience and just loves the painting.

A special edition print of this painting has been donated to the United Way of Cobourg, and was displayed at local banks for a charity auction in 2004.